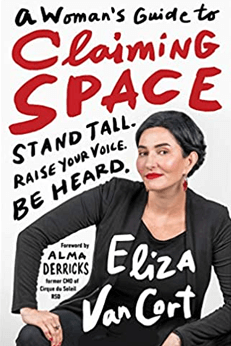 If you’re a businesswoman or you know a younger woman heading into the workforce, I highly recommend  Eliza Van Cort’s book, A Woman’s Guide to Claiming Space: Stand Tall. Raise Your Voice. Be Heard.

Claiming Space is a blunt, and honest guidebook for how women can take their place in our society and be proud of themselves.

I received a review copy of this book. And on a recent rainy Saturday, I snuggled into the couch with a blankie, a warm cup of tea, and a dose of “where have you been all of my life” wisdom from Eliza Van Cort.

Eliza Van Cort’s life might have come out of a Hollywood studio, except that it hadn’t.  Her schizophrenic mother kidnapped her three times, taking her on a hitchhiking adventure across the country where she ended up in foster care. Her father eventually found her and brought her back to Ithaca, NY where he enlisted women in their community to help — forging Elizia’s belief that women must support each other.

She went on to have a normal, successful life; going to college, being a mom, working as an actor, and starting an actor’s studio.

Then in 2014, she was hit by a car while riding her bike. Both her memory and communication were affected.  Eliza’s best friend Kate encouraged her to write. This helped her recovery both mentally and physically.

I wonder what Eliza Van Cort’s life would have been like had she not been hit by a texting driver, suffered a traumatic brain injury, and ultimately clawed her way to success.

Would she have been an object in motion that stayed in motion and ended up like so many women; competent, credible, and carrying just enough insecurity to achieve moderate success, but not her true potential? Or, was this accident more like the pull of a slingshot that set her back only to be projected so much further than she thought she could go.

You’ll have to read her story to see how your recovery and therapy inspired the content of this book.

Today, she is a speaker, consultant, and writer.  She’s a Fellow at Cornell University, an advisory board member of the Performing Arts for Social Change, and a member of Govern for America’s League of Innovators.

Straight Talk and Practical Advice Because Your Life Depends on It

Let’s get something straight. I’m not an especially emotional person.  I don’t cry at commercials or even at movies (too often.) But there were chapters in this book that took my breath away.

The book is structured like the ripple formed by a stone’s throw:

Part 1: Claiming physical space: This one is all about moving and controlling your body and your voice.

Part 2: Claiming space collaboratively: This section is about cleaning and clearing your head; understanding your worth, getting away from people who make you small, and creating connections.

Part 3 and Part 4: These are power chapters and give examples and advice that will make most women over 40 cringe at the many opportunities for strength and power that you’ve ceded to others.

Part 5: Include parting words of advice on how to use your newfound strength.

Oh Yes You Can — And You Should!

There were too many times I found myself reading and rereading entire sections because I thought I read it wrong.

Van Cort talks about high and low behaviors.  High behaviors are those that are designed to “scare the crap out of someone even if your words sound really nice” (yeah, that’s a direct quote)

So wait, it gets better — here’s what she says to DO.  Remember this is advice for women.

I read and re-read this section because I couldn’t believe what she was saying.  My “girl brain” was screaming “that’s rude!” Whether you’re a woman or a man, I know you’re thinking “that’s rude!” And, at the same time, we all know that these are physical power moves whether conscious or unconscious.

Every other page in this book is filled with this kind of eye-opening advice.

Reading this book was a profoundly emotional experience for me. At times, I felt like a lot of lessons came too late for me to apply.  But, in truth, it’s never too late to take on the challenges Van Cort throws down.

While men are NOT the target audience here, I think men who are interested in understanding and helping the women in their lives might find it interesting. Reflecting on my own emotions around some of the content in Claiming Space, I’m insanely curious to hear honest feedback from male readers.

Reading Claiming Space feels like a bucket of cold water. I’d make it required reading for any young woman over 18 and women in any leadership position.

This article, ““Claiming Space” is an Eye Opener for Women in Business” was first published on Small Business Trends